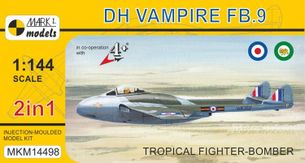 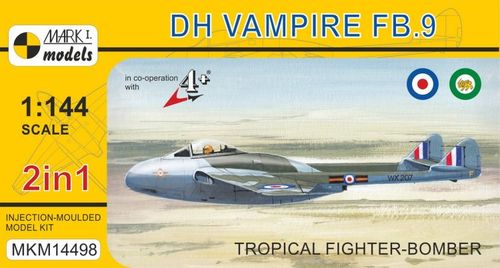 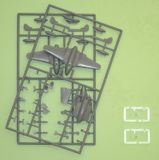 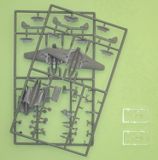 The de Havilland Vampire was a British jet fighter developed during WWII. It was the second jet, after the Gloster Meteor, operated by the RAF. It replaced wartime piston-engine fighters and was in front-line service until 1953.

The Vampire FB Mk.9 was a tropicalised fighter-bomber variant based on the Vampire Mk.5, which was in production from 1951 to 1953. It was a single-seat monoplane aircraft, of a combined wood-and-metal construction, powered by a DH Goblin turbojet. It featured twin-boom tail configuration with two wing-root intakes, bubble canopy and was fitted with a non-ejection seat. It was equipped with four Hispano cannons mounted in the fuselage nose. A Godfrey air-conditioning unit was installed in the starboard wing root of the FB.9. Two external fuel tanks or 500lb bombs could be carried under the wings, while eight 3" RPs could be attached inboard of the booms.

Almost 1,600 Vampires of Mk.I through to Mk.9 were manufactured (of which 347 were FB.9s), and another thousand of other Marks were built under licence in other countries.
The Vampire FB.9 equipped a number RAF squadrons in the Middle East and the Far East. Some FB.9s were also loaned by the RAF to the RAAF in Malta and to the RNZAF in Cyprus and Malaya. In 1953-54 the Rhodesian Air Force acquired 16 Vampire FB.9 fighters, fitted with a more powerful Goblin engine. A further batch of 13 FB.9s was obtained from South Africa in the late 1960s. After almost 30 years of service, they were the last Vampires used on operations anywhere.

Two injection-moulded kits are supplied in this box and each kit contains 31 parts and three clear parts (the cockpit canopy and position lights). A comprehensive decal sheet is included.