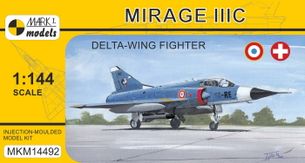 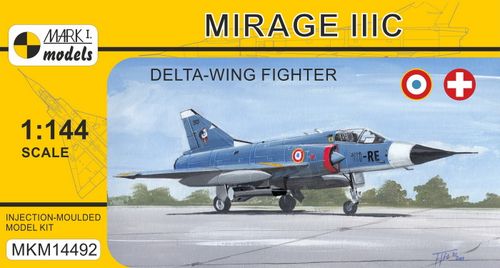 The Mirage III jet fighter was developed by the French Avions Marcel Dassault company and its prototype flew in 1956. Regarded as a versatile second-generation fighter, it was the first Western European aircraft to exceed Mach 2 in level flight. The first major production model, the Mirage IIIC, took off in October 1960. A total of 95 were built for the French Air Force, with which it remained in service until 1988. A single aeroplane of this variant was also sold to Switzerland, while a total of 36 modified a/c, known as the Mirage IIIS, were constructed under licence by Federal Aircraft Works F+W.

The Mirage IIIC was a single-seat, all-metal monoplane featuring a tailless delta configuration. It was powered by a SNECMA Atar 09B turbojet and designed for all-weather interception, close air support, ground attacks and also fighter-bomber role.

This injection-moulded kit contains 49 parts and one clear part (the cockpit canopy).

A comprehensive decal sheet is included.