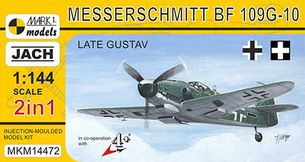 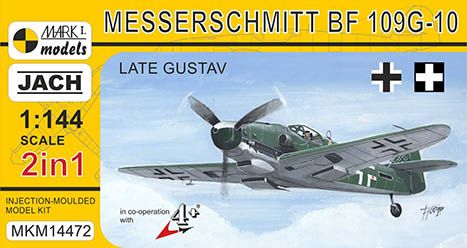 The G-series aircraft were introduced in mid-1942. The initial variants differed only in minor details from its predecessor, the Bf 109F, most notably in the more powerful engine. Except some early aeroplanes, the bulk of Bf 109G-10s were fitted with DB 605D engines and featured the Erla clear-view canopy, large main wheels with corresponding large oblong wing bulges, deeper oil cooler under the nose and tall tail fin.

The Bf 109 was the most produced fighter aircraft in the aviation history, and besides the German Luftwaffe it served in many other air forces and gallantly fought in all aerial combats of WWII.

Two injection-moulded kits are supplied in this box and each kit contains 26 parts and one clear part (the cockpit canopy). A comprehensive decal sheet is included.