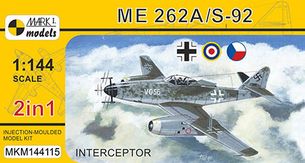 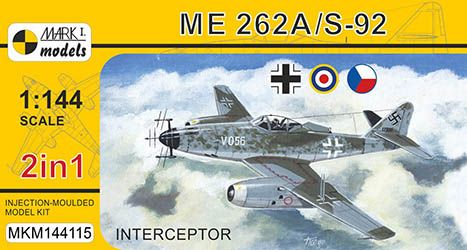 The Me 262 Schwalbe was a German jet fighter designed by the team led by Willy Messerschmitt. It was one of the most advanced warplanes to see front-line service during WWII. Its protracted development began in 1939, but aerodynamics research work and jet engine development delayed its mass production. The prototype Me 262V1 flew in April 1941, followed by a number of research and pre-production aircraft; the series-built Me 262As appeared only in the summer of 1944.

The Me 262A single seater was built in three main versions: A-1a fighter, A-2a fighter-bomber and A-1a/U3 reconnaissance aircraft. It was an all-metal low-wing monoplane, of a streamlined design, powered by two Jumo 004 turbojets suspended under the wings. It featured novel features such as swept-back wing and a tricycle landing gear. It had a clear-view canopy and was fitted with a non-ejection seat. It was equipped with four MK 108 cannons mounted in the fuselage nose. Two bomb pylons could also be carried under the front fuselage (A-1a/Jabo and A-2a variants), while two racks for R4M air-to-air rockets could be installed under the outer wings (A-1b). More than 1,400 planes were produced, but a max. of 200 were operational at any one time. Even though the Me 262s were rather late and unable to turn the tide and help the Germans to win the air war over Europe, they were capable interceptors and a significant menace.

A number of Me 262s fell into Allied hands and some were examined in Britain, the USSR and the USA post-war. A few Me 262As, designated the Avia S-92, were also operated by the Czechoslovak Air Force; a total of nine S-92s were introduced in 1947 and used until 1951.

Two injection-moulded kits are supplied in this box and each kit contains 34 parts and one clear part (the cockpit canopy). Two small frets with photo-etched parts and a comprehensive decal sheet are included.