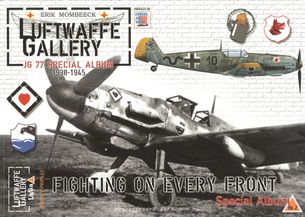 Author Erik Mombeeck spent more than 20 years tracking down and meeting up with many of the former members of Luftwaffe fighter wing JG 77, collecting their testimonies, copying their documents and assembling the best of them for this second "Special Album" of the "Luftwaffe Gallery" series. This is not a day-by-day history but a compilation of stunning photographs (many published here for the first time) and personal accounts by the pilots and ground crews who were there, superbly illustrated with the aircraft profile artwork of Thierry Dekker, one of the best in his field. The story of JG 77 is told here in broad strokes and for the first time in English. Characterized by the diversity of its origins, the unit fought on all fronts where the Luftwaffe was committed (hence the title of the album), it pilots seeing action with the Messerschmitt Bf 109 virtually from first to last. JG 77 was notable not only for the number and quality of its emblems and personal insignia but also for the presence in its ranks of a very large number of the leading Luftwaffe fighter aces. As was the case with our first "Special Album" dedicated to the "Abbeville Boys" of JG 26, the limited print run of this latest title in the series is likely to make it a highly sought-after collector’s item in just a matter of months. 234 photos and 34 profiles